In the Beginning…the Lawyer Created the Opening Statement.

This is not a line from Genesis, but rather the bible of all attorneys.  My opening statement provides the first impression of your case and shapes the impressions of the jury.  An opening statement forecasts to the jury the evidence they will see and hear during the trial and allows the jury to know what to expect and to be able to understand the evidence when it is presented.

1.  Tell a compelling story
2.  Present some of the facts in a decisive and persuasive manner
3.  Connect with the jurors
4.  Explain our side briefly, but convincingly

It is one of the traits that has put me in good stead in California criminal courtrooms for decades.  I have honed my opening statement skills through time and practice and will bring that expertise to bear in defending YOU!  My name is William Chestnut.  If you are looking for strong, honest criminal defense please call me at (408) 298-6990.
1 comment:

It’s as Old as Adam and Eve.

Domestic violence is even more prevalent in the United States and the state of California these days.  Accusations can ruin a man’s life.  When charges of domestic violence are brought up against you, your attorney must evaluate the police report of the incident and will then formulate their defense.  You will need steady, experienced representation for this.

1.  What did you tell police about the incident initially?
2.  Were there any witnesses to your alleged violence?
3.  What was your emotional state when questioned after the arrest?
4.  Are there visible signs of a struggle?
5.  Were you or the accuser under the influence?

These and others are part of the many questions that need to be addressed for your successful defense.  In the San Jose area and the state of California the right choice for a domestic violence defense attorney may very well be William Chestnut.  Bill has decades of experience and you should probably give him a call right away at (408) 298-6990.
No comments:

Knowing what is and is not a Misdemeanor in California.

The legal world bandies about the terms misdemeanor and felony all of the time.  Don’t get the idea that a misdemeanor is just some minor infraction.  It is, however much less severe than a felony, but it may carry a maximum sentence of up to one year in county jail and result in a fine of as much as $1000.

1.  “Standard” with maximum penalties of 6 months in jail and a thousand dollar fine.
2.  “Gross” where the jail time can be doubled and the fine is still capped at a grand.

While a misdemeanor is certainly NOT a felony it can tarnish your reputation for decades to come.  Don’t just accept a conviction for a California misdemeanor.  Hire San Jose criminal attorney William Chestnut to fight for your freedom.  For any arrest on a criminal charge in the Big Bear State count on Bill…William Chestnut of San Jose.  Call (408) 298-6990.
No comments:

Get Your Hands Off My Stuff!

In the great state of California, someone who commits a property crime may face misdemeanor or even felony charges depending on the severity of the offense.  When the crime involves the unlawful obtainment of another party's property, the severity of the charges and penalties levied against the alleged perpetrator generally depends on the total value of the involved property.

Here are some of the different types of property crimes –

1.  Petty theft…based on a relatively low value of the stolen property.
2.  Grand theft…much bigger of course, where the items or money is more than $950.
3.  Vandalism…deliberate destruction of public property.
4.  Burglary…entry into a building with the express intent of committing a crime.
5.  Shoplifting…stealing goods from a store while pretending to be a customer.

That last one (if we search our souls) have made a lot of us a guilty party at least once in our lives.  ALL of them (and more) could entail jail time and/or fines if you are convicted.  You may need the help of veteran San Jose property offense defense lawyer William Chestnut.  Make the call today, then put your hands in your pockets!  That number is (408) 298-6990.
No comments:

It starts out like a line from Shakespeare, but means a great deal today in the California legal system.  An expungement proceeding occurs when an offender of a prior criminal conviction seeks that the records of that earlier process be sealed, making the records unavailable through the state or Federal repositories. Unfortunately, sealing of records was rescinded by statute in California in 1982. Expungements now refer to ‘record clearances’.  A record clearance withdraws the guilty plea of conviction, and substitutes a not guilty plea in its place. This allows the client to legally declare to prospective employers that yes, he was arrested, but that was not guilty of the charge and the case was dismissed.

Some prospective employers are wise to this, but by law are not supposed to discriminate against prospective employees having gotten this remedy. Many of the big corporations hire investigators to examine court records and pull the original arrest report. Unfortunately, this remedy, as well as reducing the charges to misdemeanors, are all that can be done for non-prison cases.

There is a very real distinction between an expungement and a pardon.  When an expungement is granted, the person whose record is expunged may, for the most part, treat the event as if the conviction never occurred.  A pardon does not erase the event, however it does constitute “forgiveness”.  Mostly, pardons are granted by the California governor.

Getting an expungement is very real…and VERY possible!  This is especially true if you have California expungement attorney William Chestnut fighting for your side.  Find out more about this process and if it applies to you by contacting Bill Chestnut.  He fights for your cause from his office located in San Jose.  Call him at (408) 298-6990.
No comments:

St. Patrick's Day Events around the Bay Area
(Click the link above for more information)

Find out what's going on in your area for St. Patrick's Day and get out enjoy the festivities! 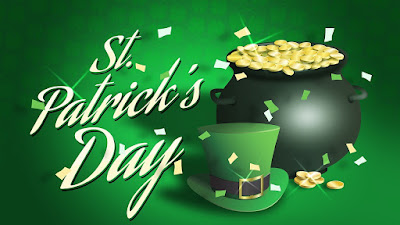 Fraud…It’s on a Lot of Minds these Days.

With the proliferation of robocalls the term fraud has popped up in the American lexicon a great deal lately.  When your mind turns to the subject of identity theft, you probably picture someone stealing your Social Security number or hacking your email account.  But unfortunately, it’s much farther reaching than that.

Here are some other examples of fraud –

There are many more of course.  That last entry is a big one for modern society especially here around Silicon Valley.  If you or a loved one has been accused of any type of fraud, please contact William Chestnut immediately.  Bill is a criminal defense lawyer serving the greater San Jose area.  Call attorney William Chestnut the fraud defense lawyer at (408) 298-6990.
No comments: